New data from PHE reveals 3.8 million people in England aged over 16 had diabetes in 2015, around 9% of the adult population. 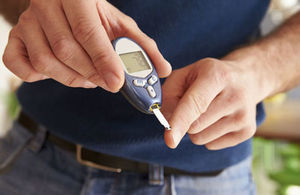 The new Diabetes Prevalence Model, produced by the Public Health England (PHE) National Cardiovascular Intelligence Network (NCVIN) and launched today at the PHE Conference at Warwick University, estimates the total number of adults with both Type 1 and Type 2 diabetes in England.

Whilst 3.8 million people are estimated to have both types of diabetes, approximately 90% of diabetes cases are Type 2; this is largely preventable or manageable by lifestyle changes and also provides additional benefits for health and wellbeing. The likelihood of developing Type 2 diabetes is increased by being overweight (although family history, ethnicity and age can also increase risk).

The figures reiterate that diabetes is an increasing burden of ill health, underlining the need for urgent action to lessen the impact on individuals, as well as the health and social care system supporting them.

The model suggests that 1 in 4 people with diabetes, an estimated 940,000, are unaware of their condition. The disease can lead to serious complications including foot amputation and kidney disease, and is associated with an increased risk of stroke and heart attack.

The number of people with diabetes has been steadily increasing and tackling it is fundamental to the sustainable future of the NHS. Diabetes can be an extremely serious disease for those that have it and treating it and its complications costs the NHS almost £10 billion a year. Developing Type 2 diabetes is not an inevitable part of aging, we have an opportunity through public health to reverse this trend and safeguard the health of the nation and the future of the NHS.

Register today and access the Meditexts system instantly and donate to the Charity supporting your condition.